I saw this very prickly intrigueing fruit at the farmers market in Hilo on the Big Island of Hawaii.  A fellow shopper raved about it. ” it tastes like milky strawberries but a little sour “. Well I had to try it!
I bought a ripe one at a farmers market in Kaieluou Kona.  As you see from the picture the exterior looks like a mis-shaped avacado with spikes. 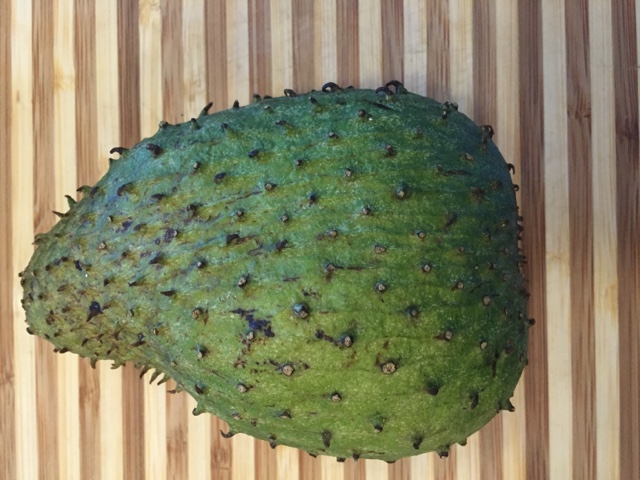 I peeled it and on the inside is a milky white flesh with little black seeds encased in a pod. 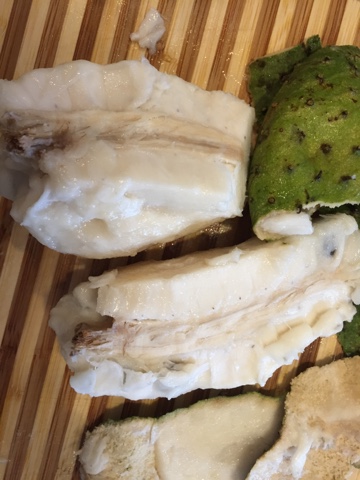 How does it taste?  Like a creamy sour apple starburst candy. The texture is similar to a ripe mango.  Delicious! I’ll be buying soursop again.
Soursop grows from the graviola tree, or Annona muricata tree native to South America, parts of Caribbean islands, Southeast Asia, tropical parts of Africa, and Pacific Islands.
Soursop can be found in many beverages and in supplements.
The fruit, leaves and bark have medicinal properties.
Soursop fruit is high in Vit C; has Vit B’s – niacin, folate, B6, pantothenic acid, riboflavin, thiamin; omega 6 fatty acids; minerals magnesium, potassium, copper, iron; good source of Carbohydrates (1).
Anticancer-Antiviral-antiparasitic  properties:
“Practitioners of herbal medicine recommend the fruit and leaves of the graviola tree to relieve stomach distress, fever, pain and respiratory problems such as cough and asthma, and for many other medical problems. Soursop contains a number of natural substances that have biological activity, according to Memorial Sloan-Kettering Cancer Center. These include fatty compounds called acetogenins, especially one called annonacin, along with other compounds called quinolones, annopentocins and two alkaloids, coreximine and reticuline. Soursop’s acetogenins are the compounds that have been most studied, especially for their potential to prevent or slow the growth of cancer. The Cancer Center also says that some compounds in soursop may be naturally antiviral and antiparasitic, and may also suppress inflammation.”
“In one study, published in “Journal of Ethnopharmacology,” an extract of soursop inhibited the growth of Herpes virus in the laboratory. In addition, the Cancer Center summarizes findings that suggest soursop extracts might slow growth of cancer cells or make them more susceptible to anti-cancer drugs. For example, in one study published in 1997 in “Journal of Medicinal Chemistry,” compounds from soursop were tested on breast cancer cells in culture and found to be up to 250 times more effective in killing the cells than some chemotherapy drugs. These laboratory studies with soursop are promising, but research with human subjects is needed to confirm its potential usefulness.” (2)
Reference:
(1) http://nutritiondata.self.com/facts/fruits-and-fruit-juices/2063/2
(2) http://healthyeating.sfgate.com/benefits-soursop-4285.html

McLaughlin, J.L., “Paw Paw and Cancer: Annonaceous Acetogenins from Discovery to Commercial Products.” J. Nat. Prod. 71.7 (2008): 1311-21: http://www.ncbi.nlm.nih.gov/pubmed/18598079(link is external)  : “The extract (in capsule form) enhances a mixture of natural anthelmintics. In addition, an encapsulated extract has been effectively used by certain cancer patients as a botanical supplement product.”

Oberliesa, N. H., J. L. Jonesb, T. H. Corbettb, S. S. Fotopoulosc, and J. L. McLaughlin, “Tumor cell growth inhibition by several Annonaceous acetogenins in an in vitro disk diffusion assay,” Cancer Letters 96:1 (September 4, 1995), 55-62: http://www.ncbi.nlm.nih.gov/pubmed/7553608(link is external): “The cell inhibition activities of several Annonaceous acetogenins, covering the three major structural classes of bis-adjacent, bis-non-adjacent, and single tetrahydrofuran (THF) ring compounds and their respective ketolactone rearrangement products, were tested in an in vitro disk diffusion assay against three murine (P388, PO3, and M17/Adr) and two human (H8 and H125) cancerous cell lines as well as a non-cancerous immortalized rat GI epithelial cell line (I18). The results demonstrate a dose-dependent inhibition of cancerous cell growth, while non-cancerous cell growth is not inhibited by the same dosages. All of the acetogenins, irrespective of their various structural types, inhibit the growth of adriamycin resistant tumor cells and non-resistant tumor cells at the same levels of potency. These results show that the Annonaceous acetogenins are an extremely potent class of compounds, and their inhibition of cell growth can be selective for cancerous cells and also effective for drug resistant cancer cells, while exhibiting only minimal toxicity to ‘normal’ non-cancerous cells” (my emphases).